For many of our ancestors, the invention of the horseless carriage meant the end of the buggy whip industry. Motorola disrupted the telephone market with mobile, and they were later disrupted by Nokia, then Apple and Samsung. My teenage boys have never even heard of Motorola, as its mobile business was dismantled nearly a decade ago. Many coaches today are wondering: With all the advancements of artificial intelligence (AI), are coaches headed toward a similar extinction?

As an organizational psychologist, I’m convinced the science is clear that the relationship in coaching engagements is crucial to influence clients to change attitudes, beliefs and behaviors. A critical problem with traditional coaching is that clients often forget to practice in between sessions or don’t seek coaching support outside of a session. While several new forms of coaching AI can augment the coach-client relationship, they’re not a replacement, substitute or threat to the coach.

When coaching AI is positioned as an extension of the developmental relationship, it improves the odds that clients achieve their goals. In part, it does this because it can give just-in-time support, and when clients journal about their attempts at practicing behaviors in safe, simulated AI situations, or in real life, the coach has an elegant view into those journal entries. This view becomes a sleek tool to nudge, praise or support clients both in between coaching sessions and in better planning for video or in-person sessions.

Rule-based AI emulates what a coach would do by following the same sort of implicit rules that are made explicit. For example, one type of coaching AI is written by an expert coach and then calibrated like an assessment instrument. The client is able to schedule when they want mobile push notifications that are “just right” for their current proficiency level and not too hard or too easy.

Similarly, there are other rule-based AI systems that provide tailored suggestions to supporters and stakeholders as to the specific actions they can take to support a client’s development. Since 2014, my team and I have seen measurable improvements in clients’ self-and-360 assessment results when traditional coaching has been complemented by this “e-Coaching.”

My team has been developing another type of coaching anchored in “deep learning” or “machine learning” technologies. When I was in graduate school, these were called “neural networks.” In those days, nearly 30 years ago, computers were just too slow and datasets too small to make them work well, but hardware and software have improved exponentially since then.

One type of this coaching AI uses trained algorithms in a specific area such as persuasive text. With Siri, or another chatbot interface, a person can use an AI coach as a sort of flight simulator for practicing new behaviors in a safe place and making improvements before trying the new behaviors in their real work or life.

Google’s David Peterson, Ph.D. argues that coaching is being disrupted and may soon become obsolete because AI is progressing so rapidly. While he’s right that there is this potential, it is not likely to replace the coaching relationship anytime soon, especially not at the senior executive levels. All of us, including executives, are highly social, and coaches have vastly better context, empathy and decision-making capabilities than AI will for quite a few years, if ever. It’s debatable as to whether or not AI will ever be able to replace a coach entirely.

For the foreseeable future, consider leveraging AI to improve your relationship with clients when you’re not together. More importantly, consider using AI to scale your coaching to the vast majority of people in the world who cannot afford the traditional version. The training market is 100 times the size of the coaching market because it’s impersonal and easier to scale. AI can be a new toolset that allows you to responsibly create new and more profitable business models, while reducing your touch time and allowing you to charge lower prices to more people.

Coaching AI is poised to dramatically grow the coaching industry by disrupting money people already spend with the training industry. I suspect this is likely because most trainers know that very little of training transfers to the job, whereas our coaching approaches are always grounded in helping clients achieve their goals and adapt as the engagement proceeds. Coaching AI allows a typical coach to improve the scope of impact and grow business without hurting current non-technology enabled coaching engagements. 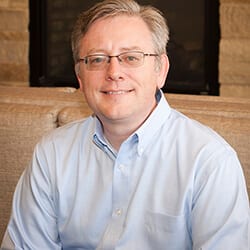 Matt Barney, Ph.D. is the founder and CEO of LeaderAmp, an award-winning high-touch, high-tech platform that scales expert and artificially intelligent coaching. He has held senior leadership roles for over 20 years at multinationals such as Infosys, where 86 percent of leaders measurably grew with his “private banking” approach to evidence-based coaching. In prior roles with AT&T, Motorola, Sutter Health and Infosys, he authored six books and was awarded five technology patents. In 2018, LeaderAmp won the Association of Test Publishers Judges Success Award and the Society for Industrial-Organizational Psychology’s Bray-Howard Research Grant.  He has been on the Business Affairs Committee of the Board of not-for-profit Scientific Publisher Annual Reviews since 2014. He holds a Bachelor of Science in Psychology from the University of Wisconsin-Madison and a Master of Arts and doctorate in Industrial-Organizational Psychology from the University of Tulsa.