Challenges for Coaches in a World Dominated by Short Attention Spans

Bill McCartney, a well-renowned football coach, once said, “All coaching is, is taking a player where he can’t take himself.”  Inevitably, this process takes some time. With the average attention span of most humans on a downward spiral, coaching, as a practice, is bound to be adversely impacted, and I firmly believe that this is already the case.

Various research exists on how the attention span of human beings is decreasing. Microsoft found that it appears to be eight seconds long now (as opposed to 12 seconds in 2007)—a lower attention span than that of a goldfish! Technology and information overload being some of the usual suspects.

Consider YouTube. Several years back, it had advertisements that you could never skip. As of January 2018, YouTube set limits and placed its non-skippable video advertisements very carefully. Its revenue model is based on the effectiveness of the advertisements. Long videos don’t manage to captivate users as much as short and impactful ones do. I attribute this behavior to low attention spans. In fact, Google, which owns YouTube, claims that the most popular video advertisements on YouTube are the ones that are six seconds long.

It is my strong belief that this attention span phenomenon is not just limited to the online digital world. Physical queues at airports, banks and other places are valid examples in the real world.

When it comes to coaching, if the coachee’s attention is not secured at the very start of the coaching engagement, even at a stage where they are trying to identify a coach, I believe that the battle is already lost.

There exists a plethora of discussions on attracting potential coachees: various aspects of marketing, advertising, interesting case studies, blogs, and so on. While these could be effective measures, I feel that, fundamentally, there is another aspect that isn’t very well addressed. For instance, these measures could probably attract those who have an interest in coaching. But, what about the ones who don’t even know what is coaching all about?

As I look at various leading organizations and leaders in this space, I realize that most of the focus is geared to engage the coachee in a potential “sample” session so that they can experience coaching firsthand. And justifiably so, as, after all, it is a one-to-one experience with a coach.

At the same time, with all the brouhaha on technology, I find very few organizations that are attempting to successfully leverage technology to provide a coaching experience, albeit a “sample” session.

As an experiment, I tried the well-known Japanese personality test to help people in their self-discovery process. The user is invited to be part of a story and innocuously answer some questions as part of that story. The answers to the story are co-related with certain personality traits or behaviors. For example, as part of the story, when a user says that they can see a lot of flowers in the desert, for most people, it means that they love the company of children. Compare this with a question that asks them if they love children. There’s a world of a difference in the approach.

This, users reported, was far more engaging than answering what some of them expressed as “mundane” questions on personality. Everyone who went through it, on a simple online tool, said that they identify mostly with the results of the findings.

With most of the users who tried the tool, it not only reminded them of their inner, true self, but it also kindled a curiosity within themselves. One of them, for instance, asked me, “How do I apply these learnings in my daily life?” Bingo! That’s a coaching session for a person who otherwise would not have considered coaching at all.

While no amount of the currently prevalent technology can replace the value of a physical interaction with a professional coach, I also believe that technology isn’t really being maximized currently. Sure, there are a few interesting applications that offer an automated “chat bot” kind of an interface and while it is a good start, there are still miles to go before we can say that coaching, as a practice, is effectively capitalizing on technology. Exploiting technology to provide an enriching self-discovery process is just the first step. Wouldn’t it be fantastic to provide the most value for a user in the shortest span of time, in an automated fashion, allowing us the capability to reach out to millions, if not billions? 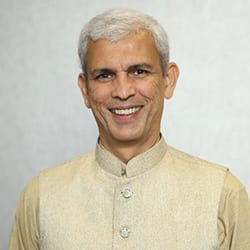 Venkatesh Madurai Subramanian, or “Venky,” is a veteran in the Travel IT professional industry, with close to 30 years of experience spread over four countries. He is passionate about coaching, as well as technology, which can be seen in action at CoachCouncil.com. He is firmly committed to exploiting technology to galvanize coaching practices in unprecedented ways.